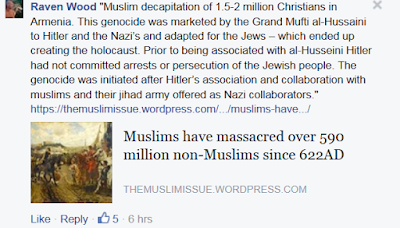 And my reply, with all of 120 seconds research to get the exact dates correct.

Raven Wood Well here we have someone who is eitherA) So woefully ignorant of History it isn't even funnyB) A Holocaust Revisionist.C) Possibly a Closet Nazi Sympathizer D) A combination of any or all of the aboveLets check the facts of History1) "The Night of Broken Glass" occurred throughout the German Reich on 9-10 November 1938.2) The Nazis started the construction of the Warsaw Ghetto on April 1, 1940. By October 16, 1940 the Warsaw Ghetto was primarily occupied by Polish Jews.3) The Nazi closed the Warsaw Ghetto to the outside world on November 16, 1940. Escapees could be shot on sightSo here we have CLEAR AND UNDENIABLE HISTORICAL FACTS proofing that the Nazis had committed arrests, persecution and murder of the Jewish people WELL BEFORE Novemeber 16 1940.4) The first time Hitler met with Grand Mufti al-Hussaini was November 28, 1941 Raven Wood, you sir are a liar.Really great company you attract Ezra, hope you are proud.PS, any of these historical facts can be found with a 30 seconf Google search to verify, but I will save you all the leg work.http://www.ushmm.org/wlc/en/media_fi.php?MediaId=6859https://en.wikipedia.org/wiki/Warsaw_Ghetto#Creationhttps://www.google.ca/#q=night+of+broken+glass

I will also include a screen capture of this comment, cause you know, Ezra sensors the poop out of everything that makes him or his fan base look bad, and this makes all of them look absolutely horrible in the extreme.

Anyways, I could have included an exhaustive list of dates, places and approximate number of Jews Murder by Nazi firing squads that predate Hitler first meeting Grand Mufti al-Hussaini was November 28, 1941, but I decide to go with three huge events in World War II that are very well known to anyone who has even the most basic knowledge of World War II history and history of the
Holocaust.

Ezra, I so pleased you have Nazi Sympathizers as part of your collection of fanboys.  I am sure that after they finish with the Muslims, they'll keep the oven warm for you.  Oh and the very least offensive option here is your readership is so woefully ignorant of history it isn't even remotely funny.
Posted by A Grumpy Hobbit at 06:00