They call themselves "Life was Better Under Stephen Harper" and really are nothing more than Ezra Levant - The Rebel Media - regurgitation crew.  Yup, you will normally first see Ezra make something up, and then these little peons will puke it up on their own page,... I said normally, but occasionally these pea brains try to do it on their own and fall flat on their faces.  Lets watch them as step on rakes.

On another note, it seems that the Stephen Harper Fanboy Club doesn't approve of MUZZLING people, but I could be wrong.  So lets run a little test.  Here is something I posted on their page a few days ago, it is the only post I made. 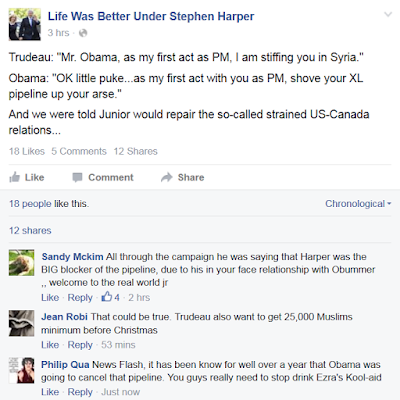 And the very next day, my comment is removed and I am blocked.  It seems on the so called Conservative Right, where they claim to champion Freedom and Freedom of Speech, censorship and MUZZLING is alive and well.  No opposing opinions allowed.  These guys make it too easy, it is like shooting fish at the fish market.