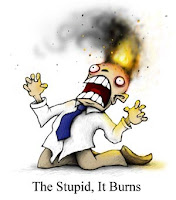 The Nazi were SOCIALISTS!!!! After all the name of their political Party was the National Socialist Party (or there abouts) blah blah blah,...

This is the one of the favorite mindless talking point I hear from RWNJs who have never crack a history book in their lives. I really detest people who knowing or through ignorance play revisionist history. So it is time to review some of the really history of the Nazi Party of the 1930.
The Nazi were not Socialists, if they were Socialists, they were the were the worst failure at being Socialist in record history,... ever. Let examine WHAT THEY DID and NOT WHAT THEY CALLED THEIR PARTY

So given all of this, this must some new form or new definition of Socialism that I have never freaking heard of. No sorry people, the Nazi were in fact a Right of Center Fascist Oligarchy and to think of them they as Socialist is the finest example revisionist history.

Feel free to share this info the next time some moron makes this claim.  If need be I will add proper verifiable link to reputable historical sources.  Most of this information came from Holocaust Historical Societies that are professional run and operated by accredited historians. In fact I will will add the links, but later, I will post updates as I fill in all the reference points.

PS, all of these fact are EXTREMELY easy to verify yourselves via reputable history sources or books.PSS, Happy New Year and may you experience less of the Burning Stupid in 2016
Posted by A Grumpy Hobbit at 14:06