To all those trained CPC Harper bots who had no issue with Harper having a private Chef and/or who were outrage about Trudeau firing said Chef,... Well seriously you just have to STFU about Ninny Trudeau hiring a couple of Nannies.  (PS, the Harper Chef also did Nanny duties in his spare time, so ya Harperbots, lets hear some of that outrage directed at Harper then too,... oh right that's different because STFU!!!)

Me on the other hand, I get to Knee Ninny Trudeau in Nads for Nannies.  It is called being consistent. 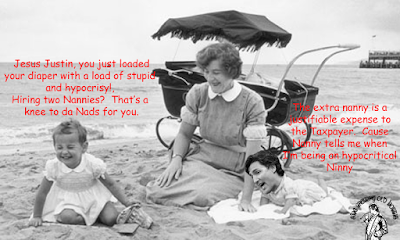