So I have been told by one of Ezra's fangirls, that Ezra always corrects himself and apologizes when he makes an error.  I called bullshit, and I think it is high time to start keeping tracking, documenting all the times Ezra and his peons at The Rebel (Reb-Bull) Media do one of the following;
Now for the record this is Sam, Conplaining to me that Ezra and Brain and The Reb-Bull Media are just the bestest and mostest honestest media out there. 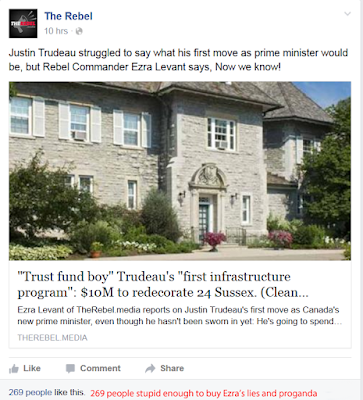 
Now I could go digging through all of Ezra's bullshit from the past, but why bother.  Let just keep track from this point moving forward.  I am sure I'll have a clear cut case in a week or so,... Just kidding, I already have an outright example of Ezra Fabrication, Lies and Propaganda (E-FLAP)

Secondly, this is not a number Trudeau invented, it from the AG Report from 2008,... you know, the one that was given to Harper back in 2008.  Since Harper did nothing, I am sure the number will be even higher now, but that's what you get when you ignore urgent repairs and upkeep on a home.

Prime Minister Stephen Harper will not move his family out of 24 Sussex Drive, the prime minister’s official residence, even though Canada’s auditor general says the house is falling apart and in urgent need of millions of dollars of repairs.


These facts are well know to Ezra, but hey if he wants to claim that he is ignorant of this, then why should we trust someone who is so blatantly ignorant of Harper's recent political history, we can only concluded that Ezra is mentally retarted.  So either Ezra is lying through his teeth by omitting key well know and well documented facts or he is mental retarted.

Not many of Ezra's Reb-Bull Media fans are buying into this bullshit story and have called him out. Though it is also far to point out many of Ezra dumber/brain dead fans did fall for this. Ezra still has not corrected the record or apologized for this baseless political attack on Trudeau.

I expect I will be wrting a lot of material on this and I am sure that I will miss a lot to, since you know,... Ezra.  This is going to be easy and a lot fun. I wonder what Ezra will make up next?